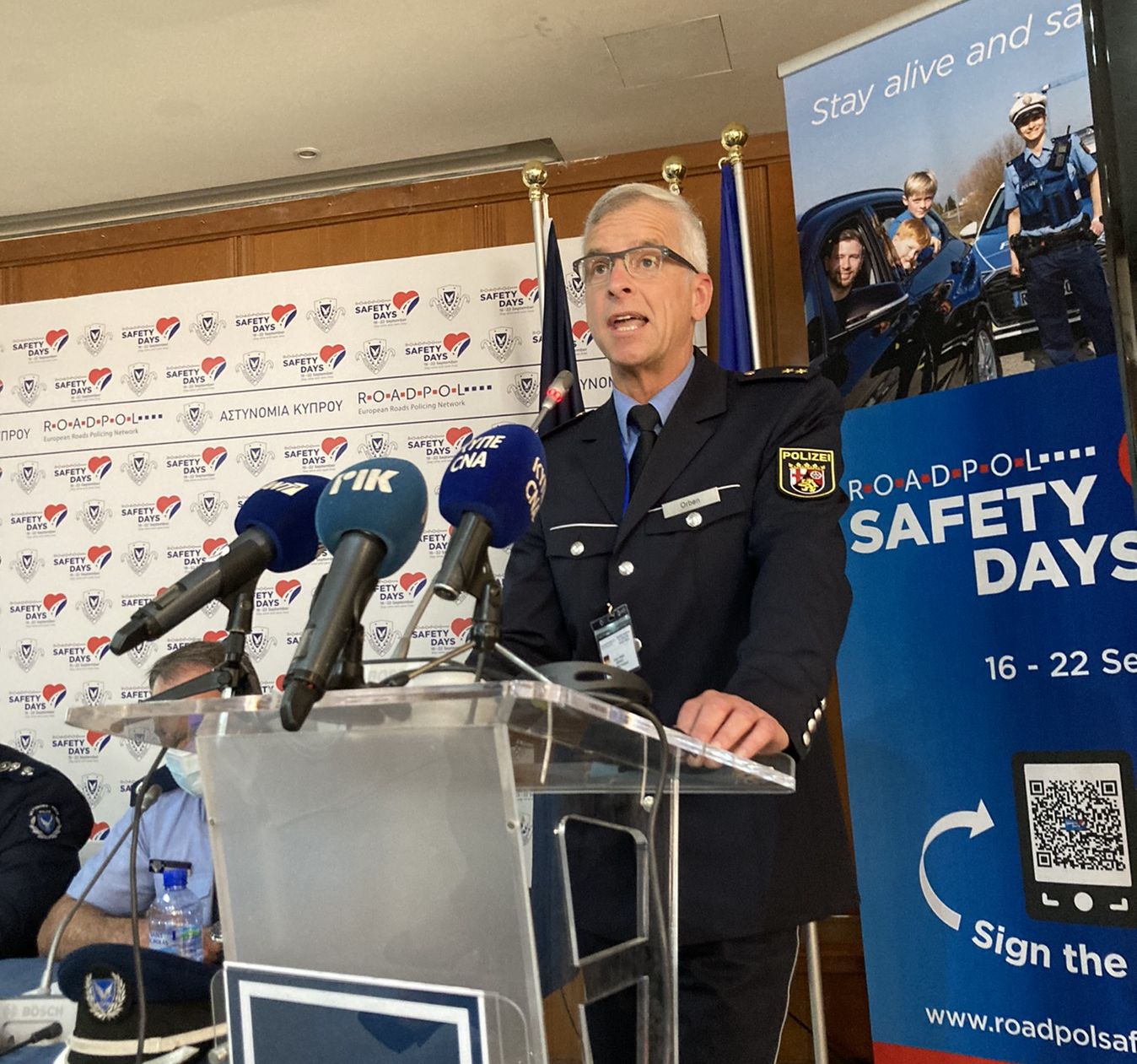 4 MAY - Zero road deaths on the roads and streets of Europe are totally achievable.

This was firmly stated by ROADPOL president Volker Orben at a press conference marking the launch of the European Roads Policing Network's flagship annual road safety preventive campaign – the ROADPOL Safety Days. At the event held in Larnaca, Cyprus, and organized by ROADPOL member Cyprus Police, Mr. Orben called on institutions, businesses, NGOs and members of the public from across the continent to support the campaign and help the ZERO to be achieved.

He reminded the audience that the goal of the campaign is to show that through collective efforts and awareness of all road users, zero fatalities on the roads can be secured for at least one single day. And if this happens, it would mean that it could be achieved on any given day to come. By tradition the ROADPOL Safety Days will last from 16th to the 22th September, coinciding with the European Mobility Week – the annual initiative of the European Commission for Sustainable Urban Mobility. The target ZERO day this year will be the 21st of September.

“The RSD slogan is “Stay Alive and Save Lives”. This is a request to all road users – drivers, passengers, motorcyclists, cyclists, pedestrians... Our campaign aims at road users understanding that it is up to them and their responsible road behavior for the ZERO wish to come true. It is actually very, very easy. All road users are requested to just do the easiest – obey traffic rules”, said Orben in Larnaca before an audience of European police representatives, Cypriot decision-makers and members of the media. “We know that about 90% of road crashes on European roads are caused by road users wrong behaviour – one or more offences against the applicable traffic law. This is the reason why we, the Police, enforce it. Because without enforcement the compliance rate would be poor. Still, despite enforcement and prevention campaigns conducted by many stakeholders, 20.000 people annually keep dying on the roads of Europe. This number is unacceptable. The European Commission is promoting the #VisionZero – the day when road death in Europe will become a problem of the past. Yes, it is a vision. And ROADPOL Safety Days is here to offer the means to achieve it. Obey the traffic rules. Stay Alive and Save Lives”, Mr. Orben appealed.

Orben expressed gratitude to the Cyprus Police for organizing the public event and for taking the reponsibility for the RSD project management and coordination for a consecutive year. Himself, Mr. Ioannis Mavrohannas, the Chief of Traffic Police Department at Cyprus Police and ROADPOL Council member, highlighted the importance of the RSD campaign. “All of us who belong to the big family of road safety, have a heavy duty to prevent and prevent losses of human lives. This is what we owe to all our fellow human beings. Our initiatives, designs and actions, reflect our strong belief, which is based on scientific data, that visual and permanent improvement of the level of road safety can not be established without a change of culture and mentality, so that every citizen accedes to a socially mature road behavior", Mr. Mavrohannas said. 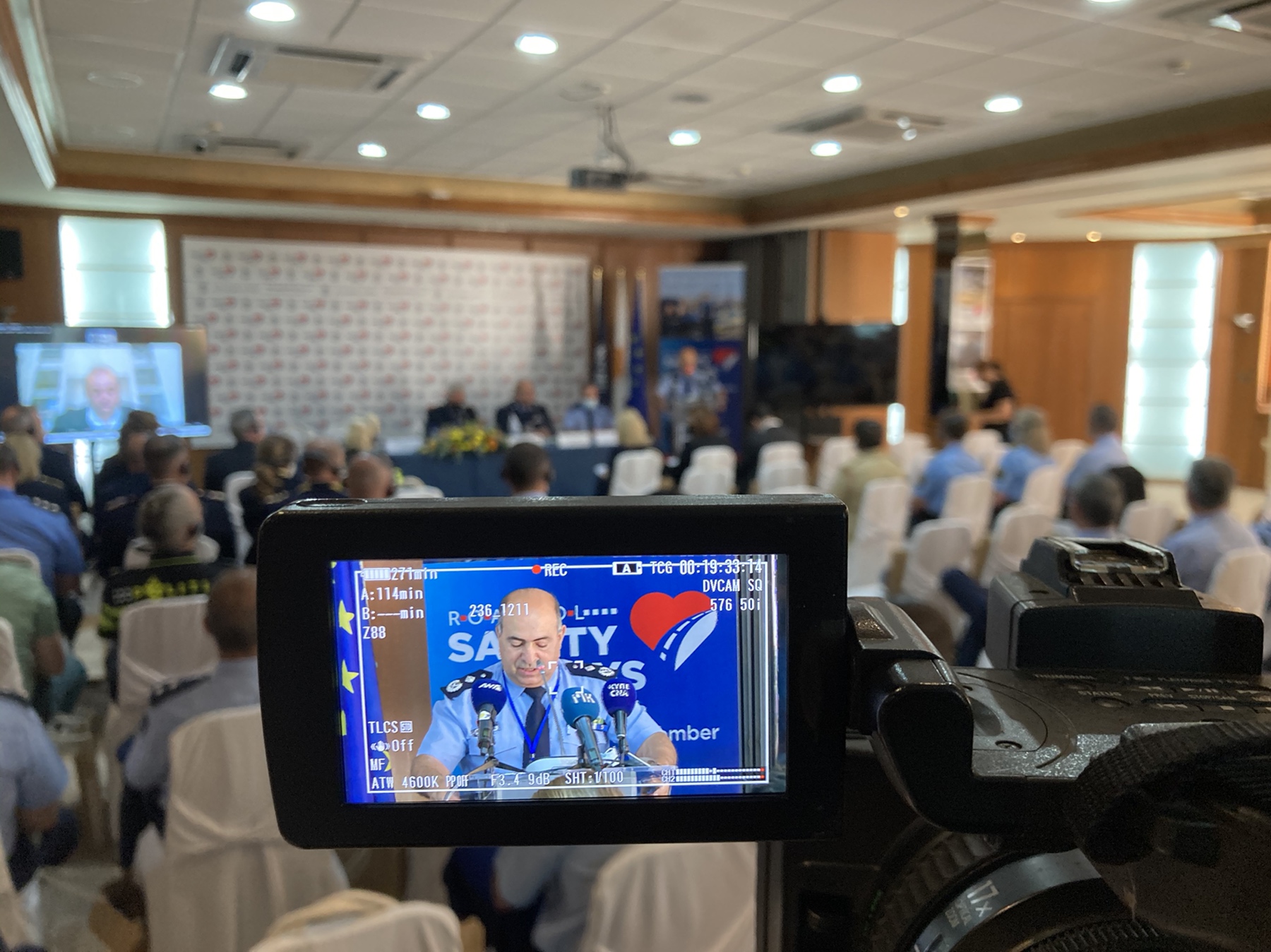 Cyprus Police Deputy Chief Demetris Demetriou addressing the audience.This was further reiterated by Cyprus Police Deputy Chief Mr. Demetris Demetriou who emphasized on the importance of ROADPOL and European Road Police forces membership in it. “The synergy and exchange of information for the adoption of best road policing practices are always useful and beneficial and can be utilized in our overall efforts to improve of the level of road safety in any given European country", Mr. Demetriou upheld. “Road safety is a fundamental aspect of citizens safety for the protection of their life and property. In view of this the ROADPOL Safety Days fall in line with our priority to change the mindset, improve road behavior and culture and bring on more road conscience among citizens", Mr. Demetriou added. 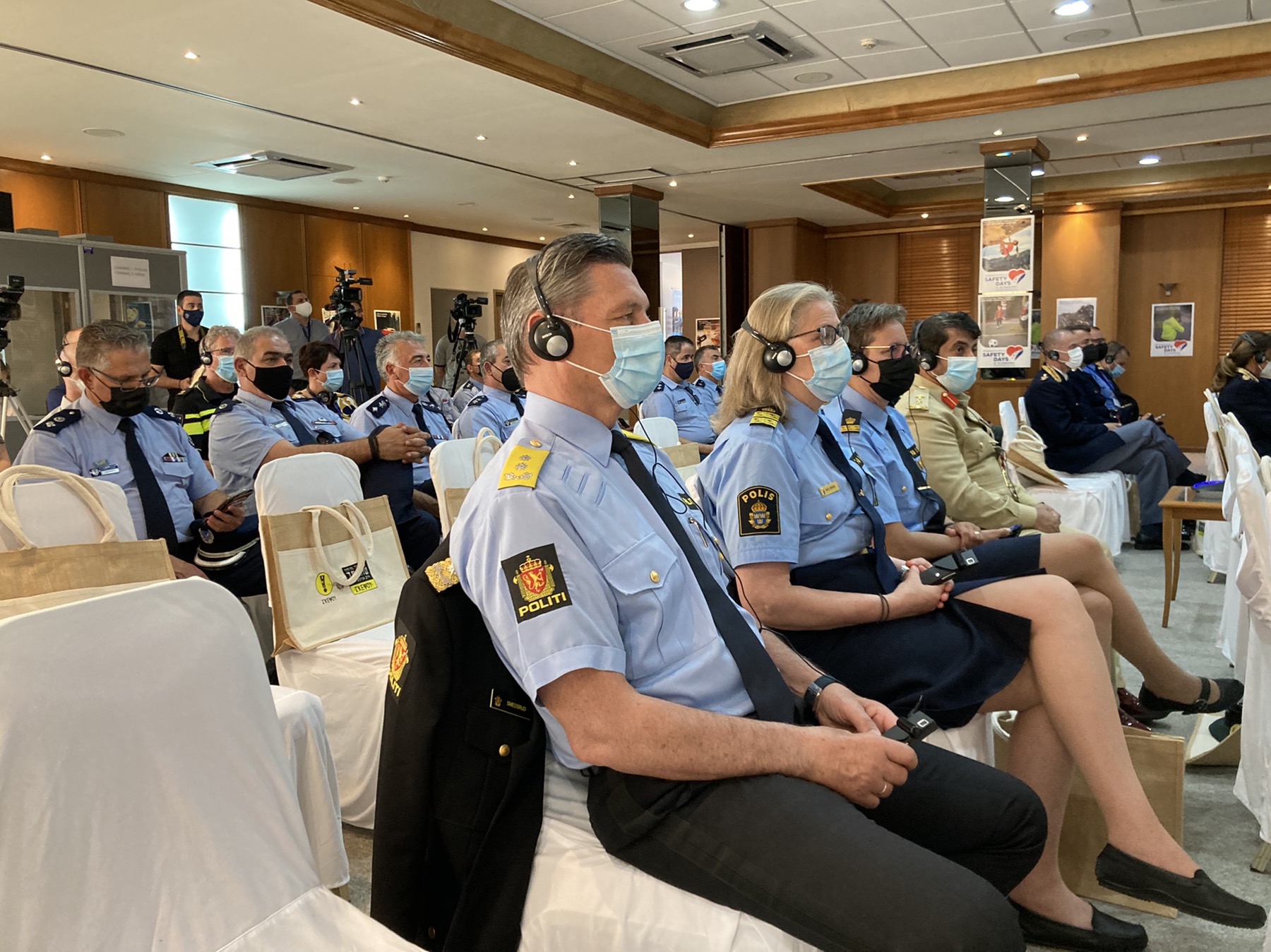 Representatives of most police forces of Europe were present at the event.Support

The ROADPOL Safety Days launch was also respected by Cyprus Minister of Transport, Communications and Works Mr. Yiannis Karousos. Hindered by a COVID infection, he joined the event virtually to support the campaign and present key measures on his political agenda targeting the enhancement of road safety in Cyprus. “The goals of the ROADPOL Safety Days with the slogan "Stay Alive and Save Lives" are identical with those of the Ministry of Transport, Communications and Works - through coordinated and targeted initiatives a strive to achieve the #VisionZero", Mr. Karousos said. He presented key points of the Cyprus' Strategic Road Safety Plan for the period 2021-2030 which aims at reducing road deaths and serious injuries in the country by 50%. Mr. Karousos also made a link between the RSD campaign and the Road Safety Ambassadors initiative in Cyprus where through a series of actions in schools, camps, and with the inclusion of the media, the aim is to raise public awareness on road safety issues and changing road culture. “No loss of life or injury on the roads is acceptable. That is why the Ministry of Transport, Communications and Works welcomes and supports any initiative that contributes to achieving the goal of zero deaths and injuries on the roads, through a holistic approach”, Mr. Karousos stated. 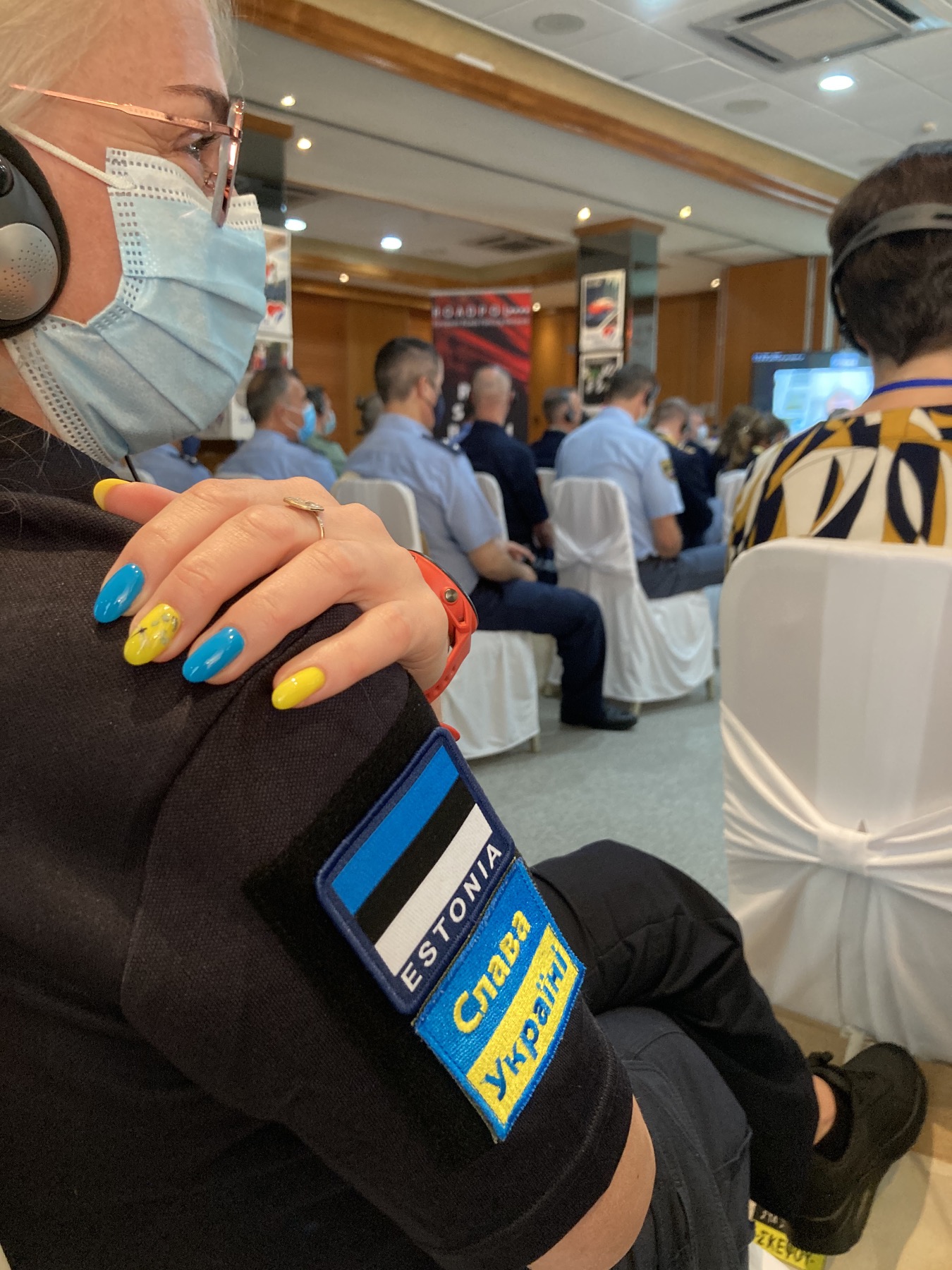 Some European police chiefs visually and unequivocally expressed their support for the Ukrainian cause at the event.The event did not go without acknowledging the perilous war raging on the brinks of the continent. “Fatal traffic accidents are mostly avoidable. Avoidable are also thousands of deaths due to the senseless war in Ukraine, caused by the aggressor Vladimir Putin. Mr. Putin, you have to obey the rules too - stop the war!", President Orben appealed at the ROADPOL Safety Days press conference in Larnaca to the applause of the audience.

These cookies collect information about the surfing behaviour of visitors to our websites. This enables us to make the structure, navigation and content of the website as user-friendly as possible for you.

Youtube and Vimeo are both online video streaming services.